The Boys of Summer have been a fixture in the Western NY music industry since their formation in 1991. Arguably the most visible and recognized. The band plays a versatile repertoire of popular music; from rock to country, classics to disco - they cover just about every style. On any given night you can catch them at a popular night club, or during the summer, down on the lake at the Dock at the Bay where they have made Tuesday nights their home for 22 consecutive years. In addition to that, they have long been one of the busiest wedding, and corporate party bands in the Buffalo area - playing on average, about 20-25 weddings a year. The Boys of Summer have played almost every country club, hotel, and banquet facility in Western NY. By word of mouth, they are now expanding into Rochester, Syracuse, Pennsylvania and Ohio. Over the years we have been so privileged to take part in such wonderful events such as: The Make-a Wish Gala's in Buffalo and Rochester, The Roswell Park All-Star Night, Juvenile Diabetes Foundation, The American Cancer Society, The American Heart Association, Children's Hospital, Chestnut Ridge Foundation, Fundraisers for various individuals in need of help, Boys and Girls Clubs in Orchard Park and Depew-Lancaster and Habitat for Humanity.
The group consists of five members.
Jim Weldy; vocals, guitar and piano,
Gary Edmonds; lead guitar and vocals,
David Green; drums and vocals,
Don Lorentz; keyboards and vocals
Steve Edmonds; vocals and bass guitar.
The Boys of Summer band gives you a consistency of value and recognition that has not been achieved by any other long standing band - in the history of Western NY. The band has won over 25 group and individual music awards since 1996, mostly for best group vocals, and best classic pop band. In 2009 the band won Buffalo Music Awards for Top Group Vocals, Top Classic Pop Band as well as individual Awards For Top Pop Bassist and Top Pop Drummer. In 2010 The Boys of Summer were inducted into the Buffalo Music Hall of Achievement recognizing the group for all of the BMA Awards received over their long career.  in 2011 the band received the Buffalo Nightlife Music and Club Awards Lifetime Achievement Award. In 2015 We were inducted into The Buffalo Music Hall of Fame. 2019 marks 28 years and there should be some great things in store this year. Stay tuned!

The Boys of Summer Band Bio’s

Jim Weldy - Guitar / Keyboards / Vocals
I started playing guitar and piano in fourth grade at the age of 9 and have been playing ever since. From 1977 through 1991, I played in a wide variety of groups, mostly in the commercial Top 40 field, and mostly in Buffalo but also traveled 2 years on the road. In February of 1991, I, along with keyboardist Michael Carroll expanded on the idea of a fun, summertime band. We had met 2 years earlier in a project called Endless Summer in 1989, and did steady Thursdays at Shooters which had just opened. When the band broke up, we decided to reform as we had just too much fun performing together! I suggested the name The Boys of Summer because we planned to do a lot of Beach Boys, Don Henley and the Eagles. The other Boys of Summer the Bisons, were drawing huge crowds at their new stadium at the time and I felt the name The Boys of Summer would get a lot of free exposure, and boy I’m glad it did!
At that point I called on my very good friends Gary (lead guitar) and Steve Edmonds (bass) and asked them to come aboard. They were very talented musicians and tremendous vocalists in the country circuit and the three of us always had a good chemistry whenever we sang together. This was essential to do the music we were planning. They brought on Eric Zak on drums from their country band and we began performing that summer at the Harbor River Café as a summertime only part time band that summer.
I have performed with other bands. I formed New Release in 1983 and 4 years later joined another commercial band, Free Fall. I left Free Fall after 7 years and then played briefly played in Night Life, where along with David Green, the Boys of Summer’s new drummer, met Don Lorentz. Donnie eventually replaced Mike Carroll on keys in The Boys of Summer and that’s almost that! Geff Gismondi became the newest addition in 2009 replacing Steve on Bass and vocals, and that completes our lineup!
I started a solo show back in 2000. After a successful debut at The Tralf I have become well established in the solo field though the Boys Of Summer remain my focus. I feel fortunate to play with these very talented players, and consider them my closest friends. I have been nominated 3 years for top solo artist in The Buffalo Music Awards.
My musical preferences are The Beatles, Surf Rock, Classic Rock, Elton John, Billy Joel, Jimmy Buffet and Jim Croce.
I am sole proprietor/owner of a jewelry business called Forever Precious which I started in 1996.
I have two awesome children Casey and Carly who are extremely talented musicians and I am very proud of them.

Gary Edmonds - Guitar / Vocals
Gary Edmonds has been a member of the Boys of Summer band since it’s inception in 1991. He and his brother Steve Edmonds were paired together in the band up until 2008. Gary comes from a country music background where he started his career at 16 years old. His first fulltime venture led him to a group from which his Mom was the singer in, the Vanishing Breed. It was there that Gary established himself as a lead guitar player and singer. He later joined up with his brother Steve in what would become one of the most working country bands in the area, Keith Allen and the Cross Country Express. Working an average of 5 nights a week, Gary became a regular nominee of the Buffalo Music Awards. Gary has written and recorded radio commercial jingles in his home studio, which have aired on local radio stations. Over the years Gary has taken multiple Buffalo Music Awards including Best Country Guitarist in 1991. Also, best Acoustic guitarist in 1995. Then finally after several years of nominations, Gary accepted the Top Rock Guitarist award in 2007. The Boys of Summer continue to be one of the hardest working, and successful bands in the Western NY area. This success is what Gary is most proud to be a part of.

David Green – Drums / Vocals
In March of 1994, David was asked to fill in for Eric Zak the original drummer for The Boys of Summer and have been with the group ever since. David started playing drums in third grade at the age of 8. He played drums and percussion all the way through High School. His first experience playing in a band was with some close high school friends playing country music at a Moose Lodge in Hamburg. In 1978, he joined the local country band Lone Star Express, and had the privilege of playing with Tom Bath, who at the time was one of the area’s best steel guitar players at the age of 16. In 1979, Tom and David moved to Houston, Texas to pursue music on a full time basis. They played in one of the hottest bands in the city and had the privilege of performing with country music all time greats such as; Johnny Paycheck, Ray Price, Faron Young, and 3 times with John Anderson. In the winter of 1981, David moved back to Buffalo and joined the local country band OK Corral. In 1986, he left the group and joined the band Union Transfer who played a little more of a variety of music including country but also had a complete Elvis show. They performed for 17 months every Sunday night at the Golden Nugget on Seneca St. in Buffalo where he first met Gary and Steve Edmonds. In 1991, David joined the wedding band Transition which really helped his skills playing different genres of music including Top 40 dance and rock. After his first experience with the Boys Of Summer in 1994, which was a part time group at that time, Jim Weldy and David joined the wedding band Nightlife were they met Don Lorentz. At the end of 1995, they decided the make the Boys of Summer a full time band and dedicate all of their energy to making that group one of Buffalo’s best. In 2006, with much thanks to Jim Mangano, David received the first of his Top 40 drummer Buffalo Music Awards. He received the award in 2007, 2008, 2009 and 2010 as well. In 2010 he was inducted into the Buffalo Music Awards Hall of Acheivement recognizing him for his 5 consecutive awards. Some of his favorite drummers are Don Henley from the Eagles, Ryan Dusick from Maroon 5 and David Garibaldi from the Tower of Power. David’s drumming philosophy has always stressed solid playing and being the time keeper. He is currently employed at The Tile Shop in Cheektowaga, New York. He has been married to his wife Lori for 25 years and they have 3 children, Emily, Matthew and Katie.
2017 The Boys of Summer will celebrate their 26th anniversary and I am proud to have been a part of that for 24 of those years. I consider myself very fortunate to have been with band mates over these years that I do not consider coworkers, but brothers. I look forward to continuing this relationship until the day comes that I can no longer perform.

Don Lorentz - Keyboards / Vocals
Started performing professionally at the age of 15 with the showband Headin’ On. (1971-1984)
• Opened for Bob Seger
• Performed with The Inkspots
• Performed with The Osmonds in Las Vegas
• Opened for Vern Gosdin
• Created the Bong Show in Buffalo
Transformed the band with the addition of a female vocalist to become RAZ. (1984-1987)
• Performed with Mickey Gilley & Johnny Lee
• Opened for Lee Greenwood
• Opened for Rodney Dangerfield
Joined the John Kondell Band. (1987-1989)
Started playing solo piano bars. (1989)
Joined the band Night Life. (1990-1998)
Currently performing with The Boys of Summer Band.
Nominated for Best Rock Keyboards by the Buffalo Music Awards for the past ten years.
PROFESSIONAL BIO
Business & Media Productions Teacher for 32 years.
Three-Time President of the Orchard Park Chamber of Commerce.
On the Advisory Board for numerous local companies.
Sound Engineer for the Quaker Arts Pavilion’s Summer Concert Series.
Professional Sound Installation Designer for churches and companies. 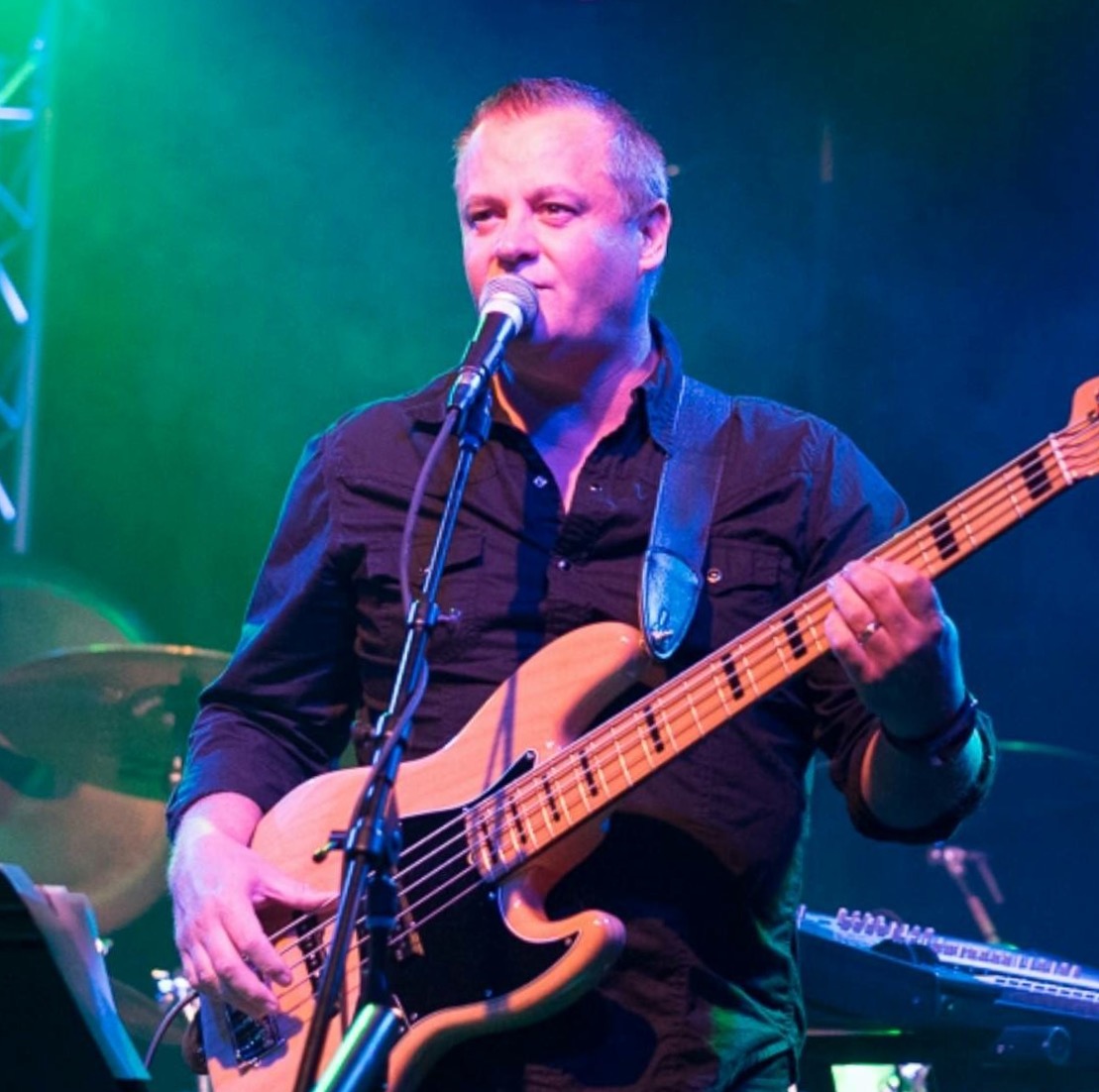 Steve Edmonds - Bass Guitar / Vocals
Steve Edmonds has been involved in music from a young age.  In the 8th grade, Steve won a talent contest with his brother, Gary which was the start of a lifelong dream of becoming a great musician.  Since 1983, Steve has played with Keith Allen and Cross Country Express, The Steve Edmonds Band, JC Thompson Band, and most recently The Boys of Summer Band, of which he was an integral part of for 20 years.  Through the years, Steve has won multiple music awards including:

Steve is proud to have been a key player in the success of The Boys of Summer Band.  Steve is now back with the Boys after taking time off to help raise his children.